I had decided that Monday was the day to see some important sights. I had a local driver, Madi, show me some historic and cultural spots. As in most countries, it is always better to have your own personal driver. Tour companies will often charge you much more and you are on a time table. A personal driver is on your time table. You can negotiate a set price for the entire trip. I paid $40USD for 10 hours! That is dirt cheap. The tour companies wanted $55USD for 4 hours. Big difference. Never book any tours prior to arriving at your destination. And this goes for any tour. Scuba, sightseeing, hiking, etc. Ask the hotel if they have a driver/guide they recommend other than the tour companies that they have agreements with as most hotels do. If they keep pushing you toward the tour companies, go into town and talk to locals working at local bars or restaurant. They will know.

The first stop was the silver and gold factory. The workers are in a small warehouse working 8 hour shifts and it was hot!

They made all types of jewelry. They formed the metals, buffed them out and set whatever gem was requested. There work was amazing!

We headed to our next stop at the Bali coffee information and tasting area. As at the Gold and Silver company, there are employees that greet you at the car and guide you. A tip is not required but is always appreciated.

This was very interesting to me. Ever wondered what a cinnamon tree looks like? Or a ginger plant? They had all varieties growing there as they put them into the coffee and tea. The cinnamon leaf smelled so good.

The coffee trees were in bloom. They only had a few plants and trees here. The actual crops were on a different part of the island.

The Luwak, I learned, is an animal that eats the ripe coffee beans. As it digests, the enzymes break down the acid and some caffeine in the beans. It then poops them out and they are broken apart and then roasted by hand. Sounds gross? Maybe, but you can really taste the difference in a good way. haha 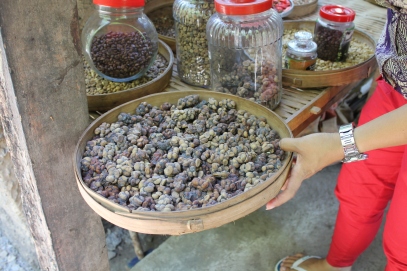 And the fruit bat was awesome! He was a good 24inches in length and very tame. 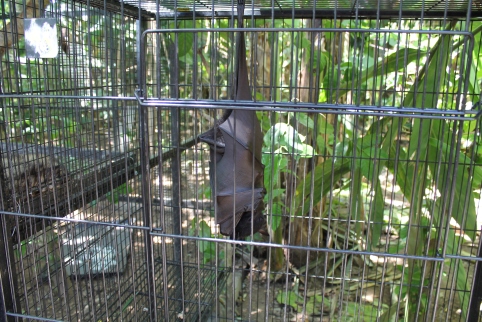 For free you can sample a number of teas and coffees. From coconut coffee to manganese tea. Very delicious!  The Luwok coffee sample is 50000IDR or around $4.50USD. Oh! and all of these stops so far are free of charge to visit. You can specify to the driver that you want mostly free locations or ask which locations cost an entrance before your trip starts so you have an idea of where you want to go.

The next stop on the trip was the Batik Colection. Here  clothes are designed and made by hand.

I did pickup a pretty cool shirt at the store. Most of the items are made by workers from their homes. Lucky them!

On to the temples…

The first temple was the Batuan Temple. Here you had to wear a wrap as part of the customs..

Damn it was hot there so any breeze up the wrap felt great as they were made of non-breathable material. This temple was free to enter. Donations were excepted and used for the upkeep. And I obliged with little hesitation. 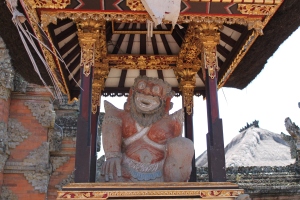 Ah.. the wrap comes off and into the A/C car for the next stop, lunch….

Madi kept telling me about eating by the rice fields. I said ok as I was game for anything. I didn’t expect such a breathtaking backdrop. the fields went on as the ocean would from a beach setting. 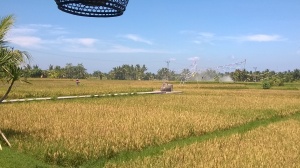 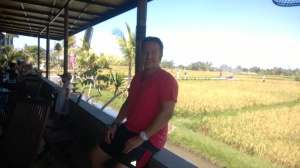 I was told by Madi and the waitress that the crunchy duck was the only option I should even think about.. Done!

In one word.. delicious!

And again, under $10USD.. unbelievable!

Madi would never come with me. The drivers all hang out together outside. They have an area at each stop where they can grab free water and some quick food. I felt bad as he was a nice guy and had a lot of good stories to tell. Oh well..

We were already in the city of Ubud so the next stop was the temple. This was pretty small. The Ubud family house was located across the street. 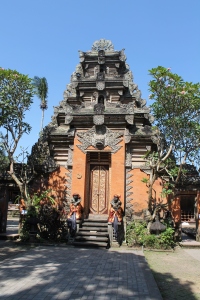 Still, the Balinese people make this whole trip worth while…

On to Tanah Lot now….